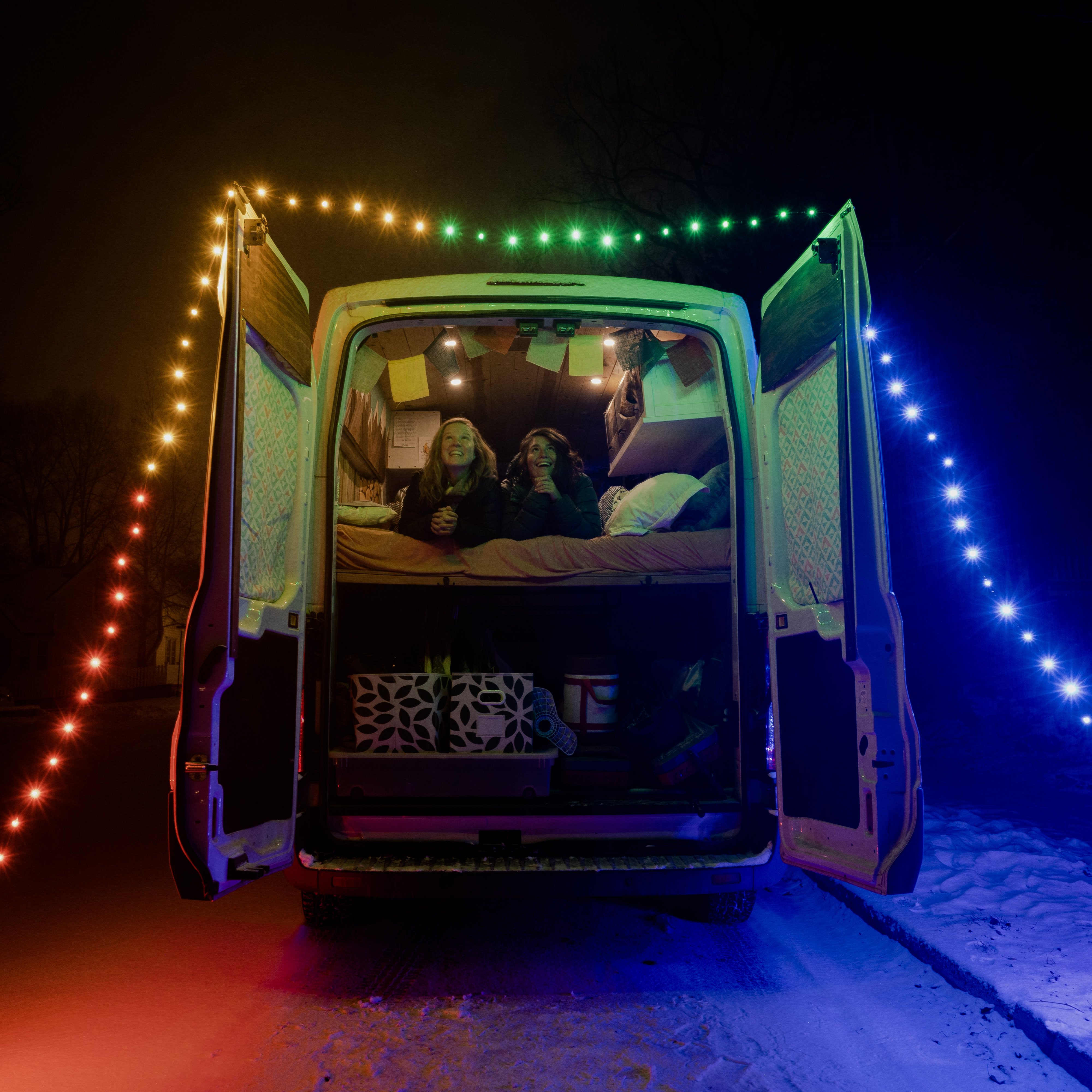 12 Feb Lovers and Friends: The Story of Aubrey and Jules’s Soul Partnership

Aubrey and Jules are cuddled up on the couch in their “shoebox” apartment in Telluride when we caught up with them. By the end of the call Aubrey’s head lands on Jules’s shoulder and there’s a moony look on both of their faces. A look that is the glazy evidence of worn-in love; a love built on “friendship, trust, and deep respect,” as they say. Aubrey and Jules met at a friendsgiving in Boulder a few years ago alongside some of our other friends, Jenny and Alyssa of Wild Barn Coffee. Both were in different relationships at the time, but they became friends – a gift that in hindsight has made all of the difference for the longevity and genuine intimacy of their present relationship. Shortly after meeting, Jules left Boulder to Telluride as a single woman where she was going to establish her dreams of working more with clay. Not long after, she got a call from Aubrey who was on a trip in Telluride with her lover at the time, saying that their campground was booked and their anniversary plans were shot to hell. Jules offered them her “daybed in the living room,” and spent the day with Aubrey (her future wife) and her partner at the time. Their friendship continued. Jules gave them a pottery lesson and demanded that Aubrey come back to play a show at the mine shack.

In October, Aubrey was set to come back to Telluride to play a show, she had broken up with her partner. Jules and Aubrey spent the weekend together without much mind to their dynamic, while their friends kept a close eye on them both and once the weekend was over, shared their opinion that there was much more going on between them than mere friendship.

They kept in contact over the next month, exchanging messages a few times a week. In one conversation Jules remembers Aubrey remarking on how funny it was not to have another potential partner in the pipeline, to which Jules replied, “put me in coach.”

It wasn’t until Jules got stuck in Denver on her way home from Thanksgiving that they saw each other again. Aubrey offered her dinner and a roof over her head that night. It was their first night together and they remember, laughing, that it was only a month after that they were talking about marriage.

Jules said it wasn’t hard to convince Aubrey to move to Telluride after that. If you’ve been, you know that’s true. The tall, waterfall mountains pull you in and won’t let you leave. Once she was there, their relationship flourished because their friendship was the foundation it was built on – an immovable and steady force that made them both feel held and supported while falling in love. Shortly thereafter, it was time for Jules’s family vacation and she knew that this sacred time would be perfect as Aubrey’s introduction to her family. “This is my person, you just have to trust me,” Jules had told her parents before they met her. Little did they know this would be the only time they had together before they got engaged during the COVID pandemic. “Our knowing was contagious,” Jules reiterated. In a short amount of time, everyone who had expressed concern for the potential of tarnishing a friendship got excited for the lifetime bond the two of them were forming. In Telluride Aubrey continues to play music with her band, LVDY. Jules runs a community pottery center where she works alongside, mostly, other women who love to use their hands. Now they’re planning for their wedding, which yes, will be in Telluride. Each of their loved ones will contribute their special gift, hand crafting plates, arranging flowers, and playing music. They’re most excited to reconnect with family to celebrate their union as well as seeing how the new administration handles our nation’s potent issues of marriage equality, climate change, and civil justice. “Finding levity” and being “brave enough” are their mantras and they remain optimistic. “We have the power to show up and 99% I’m choosing joy,” Aubrey says. Together we dream of the day when these ideas are more than issues to be advocated for, but are rather instilled truths mirrored back in our politics. We’re grateful for the radiant love they shared with us – their love lighting a spark of newfound inspiration to establish what fills us up and never let it go.