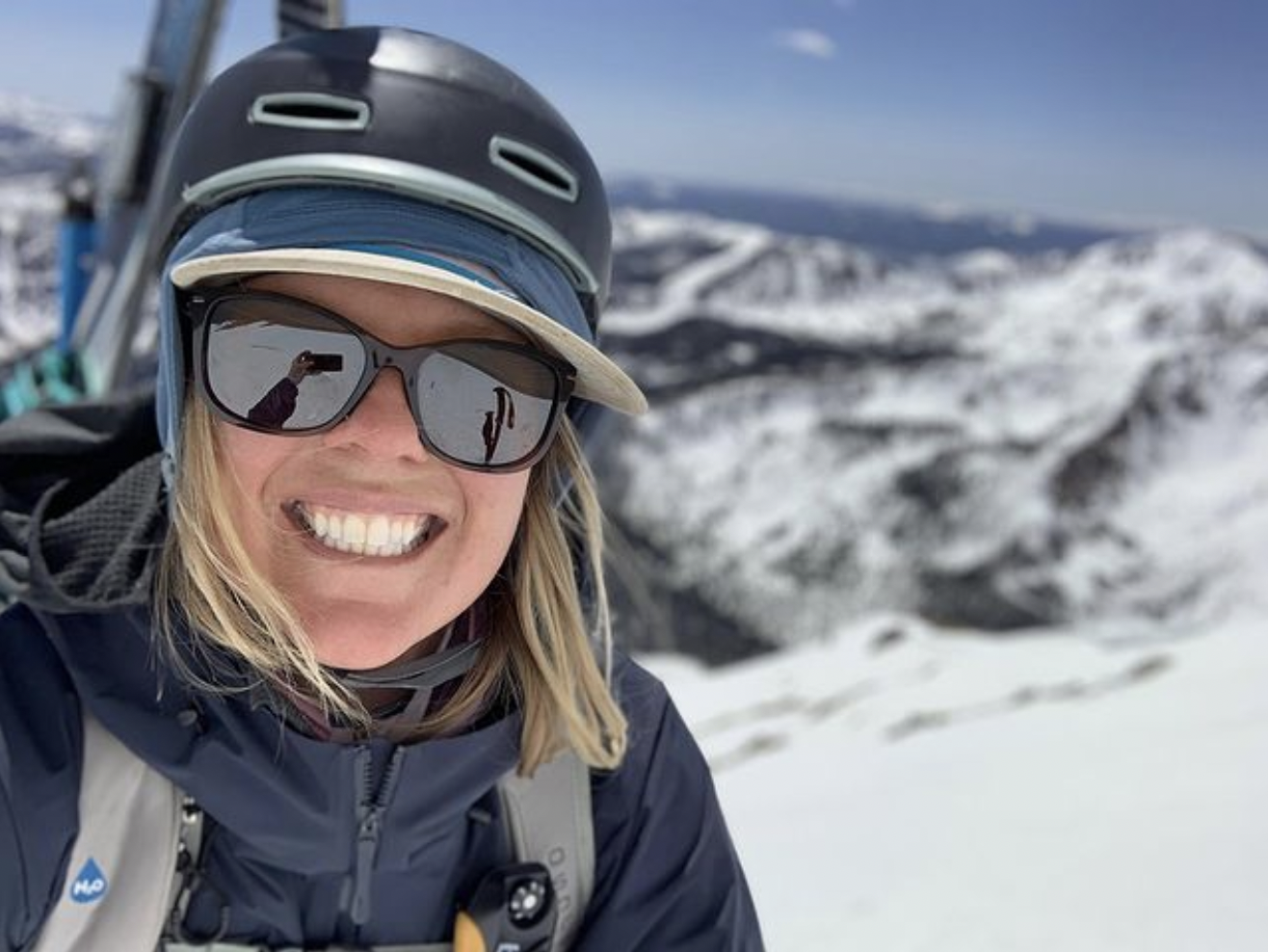 27 Apr A Real-Life Unicorn: Spotted bringing women together in the backcountry

Unicorns are real and Rhema is one of them. Rhema is many things, but the thing that comes across right away is her consideration and deep humility for the wonders of the world. She’s a long-time, forever friend and someone everyone should try to get a lap in with. Her story starts in Sarnia Ontario Canada with dual citizenship in the states. She attended Ferris State University, which is where she discovered snowboarding. She recalls $9 lift tickets and $9 rentals for students. It became her new Friday night ritual and her favorite way to spend time. After school, she left Michigan and moved to the land of the mountains to uncover more of what they could teach her. At first, she fell a lot. But, she got up every time and as she started getting better at the sport, her fascination with the mountains she was learning on grew and grew. “The back bowls of Keystone, with thick pines full of fresh pow, the moguled steep bowl of Pallavacini at A-basin, ungroomed runs at Winter Park with tight tree’s, I stared at them the same way I do now when I look at peaks in the backcountry,” she rambles off in a type of daydream, remembering when she just started out.

After years of getting comfortable on the slopes and admiring their greatness, she reached a ceiling and wanted a bigger challenge. That’s when she started splitboarding. In the beginning, Rhema mostly toured with men. It wasn’t lost to her that to see a woman in the backcountry was rare. At Loveland, doing laps, she ran into another woman and got to talking about their sport, “Do you know what I call us?” the woman asked Rhema. “Unicorns,” she said before bolting down the run. Rhema never saw her again, but has been a self-identified unicorn ever since. Since, Rhema’s been adamant to bring the splitboarding gals together. The Women Who Splitboard meet-up group was birthed from this desire and now has nearly 600 members.

Something different happens when you’re on an adventure with just women, doing a challenging and awe-inspiring activity such as splitboarding. When asked why she wanted to focus on having women-centered groups Rhema says, “It feeds the feminine energy differently, and fulfills us in a way we didn’t know we needed. We are able to be more vulnerable, soften, and it’s a less intimidating social environment, which, for a lot of us helps with learning. And in my experience, it continually destroys the narrative that women are unsupportive of each other. I find nothing in these groups except encouragement, listening, grace, and support between the women. And the stoke is always high!” She also talks a lot about how splitboarding hones a high-level of self-trust and confidence in what women know. “When it comes to being in a group in the backcountry, everyone’s voice is valued, even if you’re a newbie. I believe decisions in the backcountry should be made by group consensus. Every person is responsible for themselves out there, which is difficult… when someone is an expert, it’s easier to lean on their knowledge, but that doesn’t mean everyone shouldn’t be part of the conversation.” This thought process protects people and holds everyone accountable for taking care of each other. It also re-writes an old story that women are in the background of decision-making. Rhema is paving the way for herself and other women to trust their knowing and for that she’s an incredible leader. When asked what Rhema’s most joyful moment in the mountains, alongside her best friends and the other rare unicorns in this life, she says, “Waiting for the day that it all aligns, when you’re not forcing it to happen just because you want it to so badly, when it feels like the universe just comes together perfectly, and you get that perfect snow, and killer weather, with a manageable risk, and you’re feeling strong, and the crew you’re with is all on the same page. Those days are special gifts – those days bring me the most joy. Even though every day out there is amazing in it’s own way. The fact that things don’t align every time you’re out… that just makes those days that much more special.“ Kody, our Co-Founder, and Rhema have been friends for a very long time and both find deep value in the relationship. They, in large part, act as uplifting mirrors for one another — always reminding each other of who the other is in their very best form. We couldn’t be more thankful for her leadership and her lessons in this life. (We love you Rhema!)